The Future of Nuclear Energy 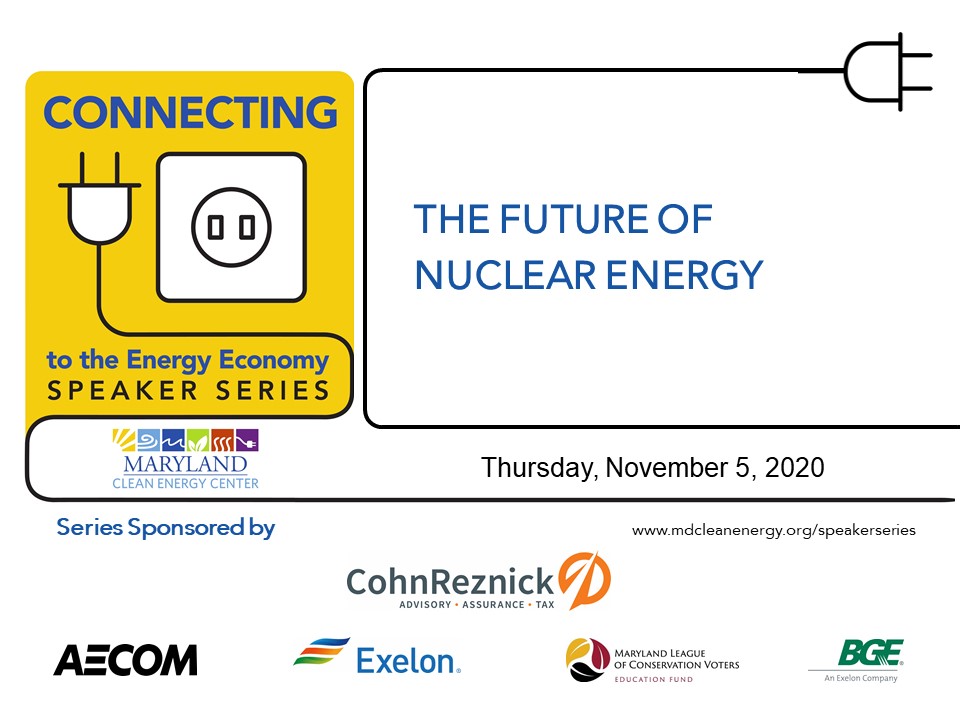 Nuclear energy is valued as a zero-carbon electricity generator. Visible nuclear power is based on 1950’s technology that was optimized to power ships and submarines. But the technology in place today does not forecast the future! This session explores the potential of nuclear power in a post fossil fuel world. With power plants designed from scratch for civilian applications, fast-neutron technology has the potential to safely power civilization for thousands of years. Given the vision of sustainable nuclear power, this webinar then explores the choices confronting Maryland (and others) today.

John Kotek is Vice President for Policy Development and Public Affairs at the Nuclear Energy Institute. Prior to joining NEI in 2017, he worked for the U.S. Department of Energy, where he was nominated by President Obama to serve as Assistant Secretary for Nuclear Energy. From 2010-2012, John served as Staff Director to the Blue Ribbon Commission on America's Nuclear Future, which recommended a new strategy for managing nuclear waste in the United States. In 2002, John was the American Nuclear Society's Glenn T. Seaborg Congressional Fellow, serving in the Office of Senator Jeff Bingaman (D-NM). John began his career with the U.S. Department of Energy in 1989, and from 1999 to 2003 was a nuclear energy R&D program manager at Argonne National Laboratory. He holds a BS in Nuclear Engineering from the University of Illinois and an MBA from the University of Maryland.

Paul has a B.A.Sc. and M.Eng. degree from the University of Toronto. Paul is a licensed professional engineer in Ontario and a fellow of the Canadian Academy of Engineering. Paul has over 49 years of engineering and management experience in the electric power sector and is a member of the Ontario Society of Professional Engineer’s (OSPE) Energy Task Force. Paul was also OSPE’s President and Chair in 2013-2014.

Paul spent 31 years with Ontario Hydro/Ontario Power Generation (OH/OPG). With OH/OPG Paul was responsible for the design, supervision and management of automation systems for both fossil and nuclear plants, and computer modelling and simulation analysis to predict plant performance.

Since retiring from OPG Paul has spent 18 years as an electric power management consultant preparing energy policy studies and recommendations. The studies included examination of electricity system supply mixes and electricity retail rate designs that can facilitate a reduction in atmospheric emissions at an affordable cost to consumers.

Dr. Alexander Cannara is an electrical engineer, a software and networking consultant, and an educator. He spent 25 years in computer networking, 12 of those managing, developing and delivering technical training. He has taught courses in engineering, statistics, programming and networking at: Stanford, USF, International Technological University, and Golden Gate and Silicon Valley Universities. Alex has worked with local and national groups on energy and climate issues and on safe nuclear power.

Dr. Cannara holds a Ph.D. from Stanford University in Mathematical Methods in Educational Research and MS degrees in both EE and Statistics. He currently consult on environmental issues, especially on clean energy sources and advanced nuclear power.

Loewen served as the American Nuclear Society's 2005 Congressional Fellow, working in the office of Senator Chuck Hagel (R-NE). Joining the Idaho National Laboratory in 1999, he contributed to the development of a Generation IV lead-bismuth cooled reactor. He was Director of Research, Molten Metal Technology in Fall River, Massachusetts. He served 10 years in the U.S. Navy.

During his career, Loewen has received several awards, including 2018 NAYGN Continental SENSEI Award; the Presidential Citation and Young Members Advancement and Public Communication awards of the American Nuclear Society; the Outstanding Mentor and Outstanding Education Volunteer of the Year awards of the DOE. Currently has 18 issued patents. He also served as a President of American Nuclear Society. Loewen received his BA in Chemistry and Math with a minor in Physics from Western State College and, MS in Nuclear Engineering and PhD in Engineering Physics from the University of Wisconsin–Madison.

Dr. Allison M. Macfarlane is currently Professor and Director, School of Public Policy and Global Affairs, Faculty of Arts, UBC. Dr. Macfarlane has held both academic and government positions in the field of energy and environmental policy, especially nuclear policy. Most recently, she directed the Institute for International Science and Technology Policy at the George Washington University. She recently held a fellowship at the Wilson International Center for Scholars in Washington, DC and was Fulbright Distinguished Chair in Applied Public Policy at Flinders University and Carnegie Mellon Adelaide in Australia. She was chairman the U.S. Nuclear Regulatory Commission from 2012-2014. Dr. Macfarlane holds a PhD in earth science from MIT and a BSc from the University of Rochester. She has held fellowships at Radcliffe College, MIT, Stanford, and Harvard Universities, and she has been on the faculty at Georgia Tech in Earth Science and International Affairs, at George Mason University in Environmental Science and Policy, and in the Elliott School of International Affairs at George Washington University. From 2010 to 2012 Dr. Macfarlane served on the White House Blue Ribbon Commission on America's Nuclear Future, created by the Obama Administration to recommend a new national policy on high-level nuclear waste.

Lara Pierpoint joined Exelon in October 2016, focusing on energy technology innovation. She leads the Corporate Strategy technical team from her post in Danville, California, advising the company on energy technology trends, investing in early- and mid-stage energy storage technologies, and running Exelon’s partnership R&D program. Prior to joining Exelon, she directed the Office of Energy Supply Security in the U.S. DOE Office of Policy and Systems Analysis, where she was responsible for policy and analysis related to coal, gas, and nuclear power and energy cyber and physical security. Before her work at DOE she served as an AAAS Congressional Science and Engineering Fellow for the Senate Energy and Natural Resources Committee, focusing on nuclear power and waste issues, energy finance, and electricity storage. She received her PhD in 2011 from MIT in Engineering Systems, studying deployment of advanced technologies for nuclear waste recycling, and she holds dual masters degrees from MIT in nuclear engineering and technology policy. She is a Co-Chairman of the Board of the Nuclear Innovation Alliance.