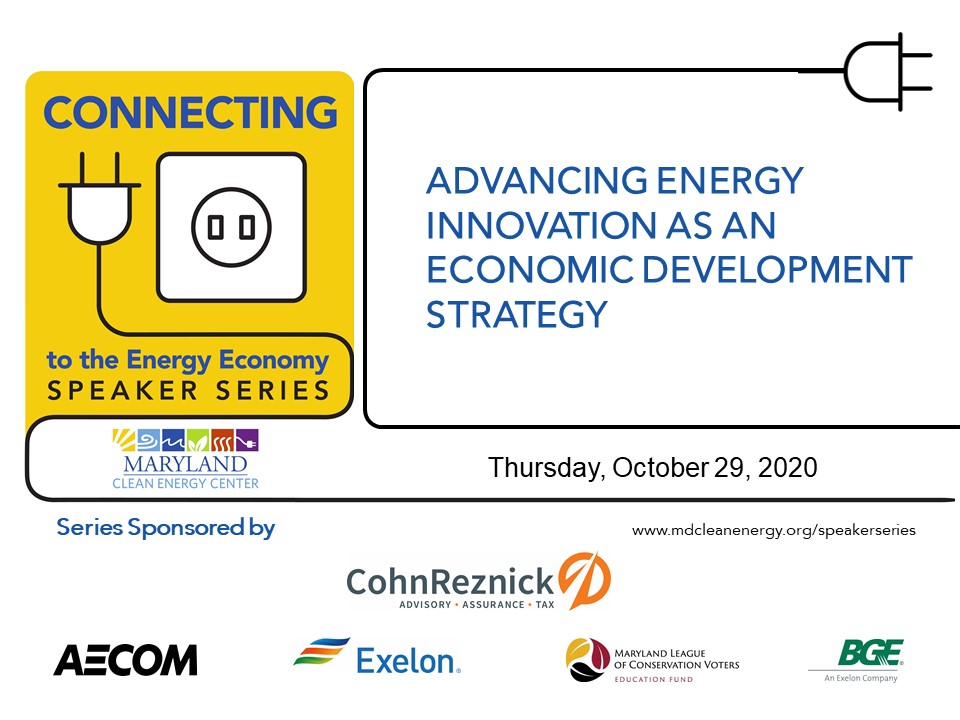 Evolving energy technologies, moving from research and development in the lab to the marketplace, provide a new foundation for economic development. States like Colorado, Massachusetts, and New York are strategically targeting public investment to support commercialization and create jobs in start-up companies. Learn about the cutting edge energy technologies moving through the commercialization pipeline from a national perspective, and what it will take to position Maryland for success in this space.

Anton Cohen, CPA, is a partner with CohnReznick and serves as the National Director of the Firm’s Renewable Energy Industry Practice. He has more than 20 years of experience servicing closely held and publicly traded clients in a variety of industries, including energy, corporate and public tax credit funds, technology, distribution, and manufacturing. He is experienced in private and public equity and debt offerings, capital structuring, and general business management. Anton’s audit, tax, and business advisory services cover a wide spectrum of clients from start-up entrepreneurs to multinational corporations.

Anton is responsible for planning and supervising all aspects of a variety of engagements, which range from audit, tax, and accounting services to strategic and operational issue identification and resolution. Anton has also assisted clients with the conversion of U.S. generally accepted accounting principles (GAAP) to International Financial Reporting Standards (IFRS) and has prepared financial statements under IFRS.

For the past nine years, Anton has been solely focused on building the Firm’s Renewable Energy Industry Practice. His experience in renewables spans a wide range of technologies, including solar, wind, and biomass. He currently audits energy companies, funds and projects, providing both GAAP and IFRS consulting.

Prior to joining TEDCO, Troy served as Chief Operating Officer at the University of the District of Columbia. He also founded and serves as Managing Member of LeMaile Stovall LLC, a management consulting firm focused on strategy, operational performance and capital stack formation. Troy was Interim President for Zenith Education Group, a $400M+, 56-campus career education system. He was a Principal with Butler Snow Advisory Services, serving higher education clients. He has also worked at senior levels in higher education as EVP/COO at Howard University and Sr. VP/CFO at Jackson State University. He co-founded and operated as the first President/CEO of GulfSouth Capital, Ambassador John N. Palmer’s (Skytel founder) multi-million dollar family investment office; he served global technology and telecommunications clients as a Sr. Engagement Manager at McKinsey & Co.; and held positions at Southwestern Bell Telephone (now AT&T), Bell Labs and Rockwell International.

Throughout his career, Steve has counseled numerous clean energy companies at various stages, sizes and technology focus. During his time as MassCEC’s GC, Steve was responsible for overseeing legal transactions across the organization representing renewable energy programs, industry support initiatives and agency operations.

Prior to attending law school, Steve was the Assistant to the Undersecretary at the Executive Office of Environmental Affairs and also worked as the legislative director for the Massachusetts Department of Environmental Protection, during the Weld administration. Steve, a Haverhill resident, graduated from Yale University with a Bachelor's degree in History and earned a Jurist Doctorate from the Boston University School of Law where he was an editor of the Law Review.

Delegate Lily Qi (pronounced "Chee") was elected in 2018 as the first Chinese-immigrant state legislator in Maryland. Her story from Communist China to Maryland legislature was featured in the Washington Post, the Kojo Nnamdi Show, and NPR.

Del. Qi had a diverse career that includes economic development, local government, and higher education. She was appointed by former Montgomery County Executive Ike Leggett to oversee economic and workforce development strategies and led a series of initiatives to advance innovation entrepreneurship, and public-private partnerships. Before joining Montgomery County, she served as a senior economic development official for Washington, DC, a spokesperson for the District of Columbia's financial regulatory agency.

Del. Qi is also a writer, speaker and trainer on immigrant integration and institutional cultural competency.

Governor Bill Ritter was elected Colorado's 41st governor in 2006 and was the District Attorney of Denver from 1993-2005. During his four-year term as Governor, Ritter established Colorado as a national and international leader in clean energy by building a New Energy Economy. After leaving the Governor’s Office, Ritter founded the Center for the New Energy Economy at Colorado State University, which works with state and federal policy makers to create clean energy policy throughout the country. Governor Ritter has authored a book that was published in 2016 entitled, Powering Forward – What Everyone Should Know About America’s Energy Revolution.

Gov. Ritter was formerly the chair of the Board of Directors of the Energy Foundation and currently serves on the Regis University Board of Trustees. Gov. Ritter is a member of Blackhorn Venture Capital and serves as an advisor to Green Alpha and Millennium Bridge, among others. Ritter earned his bachelor’s degree in political science from Colorado State University (1978) and his law degree from the University of Colorado (1981). With his wife Jeannie, he operated a food distribution and nutrition center in Zambia. He then served as Denver’s district attorney from 1993 to January 2005.

At Labor, she was responsible for managing an agency with nearly 2,000 employees and an operating budget of more than $375 million. Under her leadership, Maryland’s apprenticeship program grew to its highest level since 2008, with more than 10,000 apprentices statewide. The Department’s Employment Advancement Right Now (EARN) Maryland program received national recognition for both innovation and effectiveness and was named one of the Top 25 programs in the 2018 Innovations in American Government Award competition.

A former member of the Maryland House of Delegates representing Frederick County, she served on the Economic Matters Committee from 2011- 2015. In addition to local issues, then Delegate Schulz took special interest in legislation relating to banks and other financial institutions, business, occupations and professions, economic development, labor and employment, unemployment insurance and workers' compensation.

Prior to embarking on a career of public service, Secretary Schulz sold real estate, worked as a program manager for a defense contractor and was a part-owner of a cyber security firm. She has received several awards including the Outstanding Recent Alumna Award from Hood College in 2011, and is proud to participate as a member in many local community organizations including the Libertytown-Unionville Lions Club and the Walkersville Volunteer Fire Company. Kelly is also a past Board member of the Frederick County Habitat for Humanity.

Secretary Schulz obtained her Associates degree from Monroe Community College in Rochester, New York and later obtained her Bachelor of Arts in Political Science from Hood College in Frederick, Maryland.

A native of Warren, Michigan, Kelly currently lives in Frederick County, Maryland with her husband John Nowell and has two sons, Brandon and Bradley.

Dr. James Zahler currently serves as the Associate Director for Technology-to-Market at the Advanced Research Projects Agency-Energy (ARPA-E) where he is responsible for oversight of all Technology-to-Market (T2M) activities. The T2M team is focused on ensuring that the energy technology innovations developed by ARPA-E can have impact in the real world by advising on the formation of programs, the management of projects, and engagement with industry, investors, and other technology translation resources. In addition, James is the Program Director managing ARPA-E’s ENLITENED program focused on data center efficiency technologies.

Prior to joining ARPA-E, James has held a range of technology management and product development roles in a variety of physical technology industries, including industrial materials and equipment, solar energy, and semiconductor materials.